The Kentucky Retirement Systems (KRS) Audit Committee met Thursday morning to review a variety of items, such as third-quarter earnings and cash flow of the pension and insurance systems it manages. It reported the net position for all five plans improved, including the County Employees Retirement System (CERS).

CERS relied more heavily on investment returns to cover its expenses, while the Kentucky Employees Retirement System (KERS) was funded mostly by employer contributions. State Budget Director John Chilton, who chairs the committee, explained that is to be expected with the vast difference in the funding status of each plan. The CERS nonhazardous pension 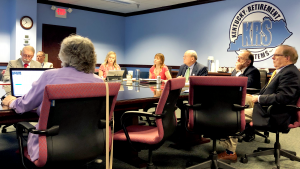 plan is funded at 50.2 percent, compared to 12.4 percent for KERS nonhazardous. “There is a big difference in the financial circumstances of the K plan and the C plan,” he said.

KRS is continuing to see an increase in administrative expenses due to increased employer contribution rates for their employees in KERS. Because CERS is 64 percent of the membership in KRS, it pays 64 percent of those costs. As of March 31, 2019, that amount had climbed to $17.5 million from $15.2 million for the same period in Fiscal Year 2018.

The committee also received an update on an audit being conducted by the Auditor of Public Accounts into compliance with Senate Bill 2 passed in 2013, employer reporting, and disability and survivor benefits. KRS divulged that it is still working with the office and awaiting the auditor’s findings.

Thursday afternoon the Auditor’s Office released the results of an audit into employer allocations of the pension and other post-employment benefit (OPEB) amounts for KRS for Fiscal Year 2018. It includes the amount of pension liability assigned to each employer in KERS and CERS and a list of current contribution amounts.

You can access the auditor’s report on employer allocations here and the audit on other post-employment benefits here.