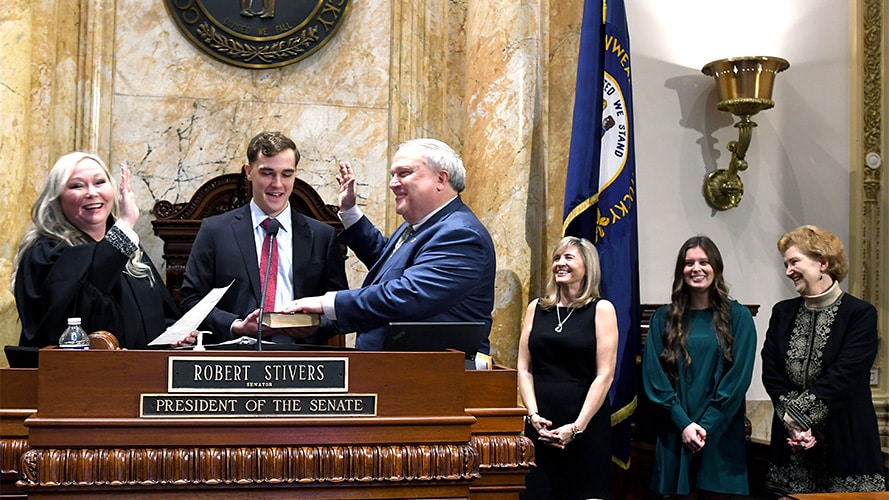 Legislators are back to work in the state Capitol. The House of Representatives gaveled in at noon and the Senate convened shortly after that. Legislators quickly filed dozens of new bills, including the House’s top priority ‒ House Bill 1. Each chamber swore in members, voted to confirm and swear in new leadership, and established rules they will operate under throughout the 30-day session.

Each chamber would have to pass the bill by a 60% margin – a requirement for appropriations and revenue bills in odd-year sessions. However, Republicans hold 80 of the 100 seats in the House and 31 of the Senate’s 37 seats. House Speaker David Osborne (R-Prospect) told the media after Tuesday’s adjournment that the House would pass the bill this week and send it to the Senate.

Other measures filed on Tuesday focused on the transportation budget, funding for a new Bowling Green Veterans’ Center, and other issues. Osborne said legislators would also discuss juvenile justice reform.

Road funding and revenue diversification remain top priorities for cities. Cities continue to grow and are the economic hubs of Kentucky. City officials are looking for revenue modernization at the local level, similar to what legislators have done for the state, to help diversify how cities pay for the services businesses and residents expect. You can see the 2023 KLC Legislative Agenda here.

The House and Senate will return to chambers at 2 p.m. EST on Wednesday. Legislators are scheduled to meet until Friday, Jan. 6, before breaking for a month. They will return for part two of the 2023 session on Feb. 7, 2023.