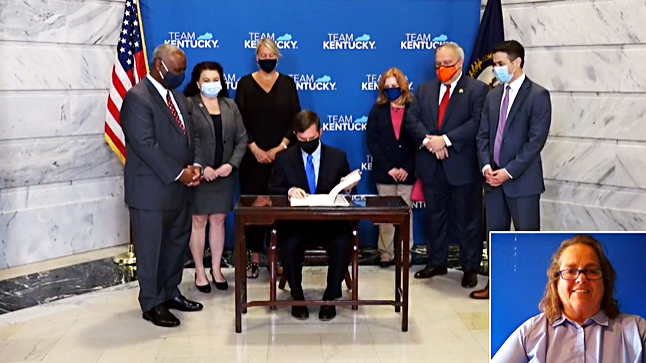 Legislative leadership from both parties joined Governor Andy Beshear Wednesday morning as the governor signed five bills into law that legislators passed in the final days of the 2021 session. The measures, House Bills 320, 382, 556, and 574, and Senate Bill 36, received bipartisan support. The governor said the legislation will create jobs, expand voting, and improve Kentucky’s drinking water, schools, and internet access.

House Bill 574 permanently establishes some of the voting provisions Kentucky utilized during the height of the pandemic, including early in-person voting, countywide voting centers, and absentee ballot drop-off boxes. “I am pleased to sign this bipartisan bill to protect Kentuckians’ right to vote,” Beshear stated. Secretary of State Michael Adams noted that the 2020 election was the most secure in Kentucky history. “This is a triumph of both policy and process,” he remarked.

The other four bills Beshear signed allocate more than $1 billion of Kentucky’s American Rescue Plan Act (ARPA) funds.  Beshear said the legislation will create 14,500 jobs and improve Kentucky infrastructure. Among the money allocated in the measures is $300 million for high-speed internet, $250 million for water and wastewater systems, $575 million to repay part of Kentucky’s federal unemployment loan, $140 million for full-day kindergarten, and $20 million for rural hospitals.

Beshear called high-speed internet a crucial part of Kentucky’s infrastructure and clean drinking water a basic human right. He pointed out that the $250 million for water and wastewater systems will be provided as grants, not loans.

The governor vetoed two line-items in House Bill 556. He deleted a provision that allocated $37 million to mitigate the spread of COVID in detention centers and pursue programs that would reduce inmate populations, saying the conditional use would likely violate federal guidance for use of the funds. The governor said the General Assembly requested the second veto to correct a drafting error that should not impact fund allocations.

Beshear also issued a line-item veto for House Bill 193, the Transportation Cabinet budget. The veto message addresses three parts of the bill, which the governor said would reduce the flexibility of the secretary of the Cabinet, pull unnecessarily from the Budget Reserve Trust Fund, cut the biennial amount of the contingency account, and eliminate statutorily permitted uses for the account.

Senate President Robert Stivers (R-Manchester) and Senate Minority Leader Morgan McGarvey (D-Louisville) spoke in support of the measures the governor signed into law. Stivers touted several of the provisions as key for rural communities, such as funding for rural hospitals and broadband. He maintained that statewide internet access would also boost tourism.