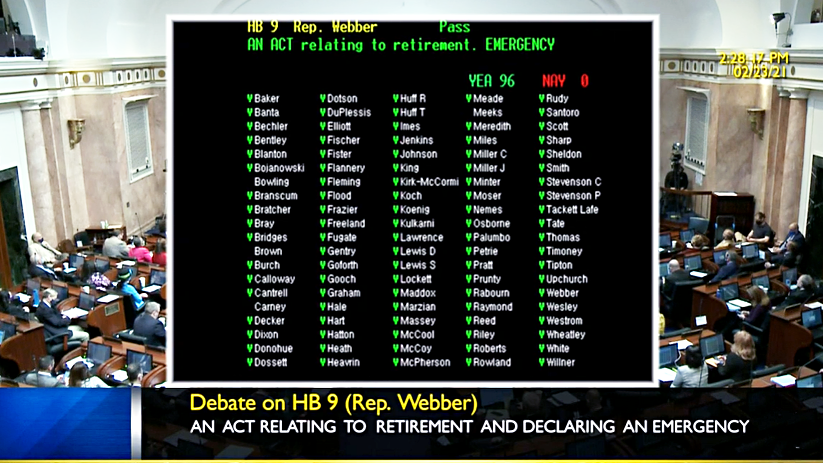 A KLC initiative that continues the effort to #freeCERS is now before the Senate. The House of Representatives passed House Bill 9 Tuesday afternoon by a 96-0 vote.

The measure, sponsored by Representative Russell Webber (R-Shepherdsville), creates separate statutory structures for the County Employees Retirement System (CERS) and state pension systems managed by the Kentucky Retirement Systems (KRS). The bill follows up legislation from last year’s House Bill 484, which created an independent CERS Board of Trustees within the administrative structure of the Kentucky Public Pensions Authority (KPPA).

Speaking on the House floor Tuesday afternoon, Webber noted that changes enacted by House Bill 484 give CERS much needed independence while providing cost savings for all three pension systems currently managed by KRS: CERS, the Kentucky Employees Retirement System (KERS) and the State Police Retirement System (SPRS). “Section 1 of the bill also called for the legislation we are voting on today,” Webber added.

By creating independent statutes for each pension system, House Bill 9 ensures changes made for one system do not unduly impact another.

The bill also makes the following changes to the language enacted last year:

House Bill 9 exempts the KPPA chief and deputy chief investment officers from KRS Chapter 18A. Additionally, the measure allows the new CERS Board of Trustees to form before April 1 but not take any official action.

Webber stressed what the bill does not do. “House Bill 9 does not change any pension benefits, does not limit the General Assembly’s ability to change benefits and does not change employer contribution rates,” he said.