The House of Representatives passed a KLC initiative on Tuesday afternoon, sending it to the Senate for consideration. House Bill 357 provides reciprocity for emergency medical professional licenses from the military or states contiguous to Kentucky. Representative Deanna Frazier (R-Richmond) is sponsoring the measure. She told members of the House it will help emergency medical service (EMS) providers and their staff as the state deals with a shortage of potential EMS personnel.

“Ensuring a quick response by qualified medical professionals is becoming more and more difficult in communities that handle 911 calls,” stated Frazier. “The number of EMS workers is going down while the number of calls for emergency care continue to go up, often requiring workers to cover more and more shifts.” 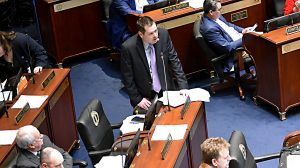 paramedic that is currently certified or licensed and in good standing by the military or a contiguous state. “Kentucky is one of only 19 states that does not recognize the training provided by other states, despite having substantially similar training requirements,” noted Frazier.

The House approved the bill by a 90-2 vote shortly after defeating a floor amendment filed by Representative Jeffery Donohue (D-Fairdale) by a 26-62 vote. The amendment would have required an emergency service provider certify in writing that there was not a qualified Kentucky resident who could have filled the position before they hired an applicant from a contiguous state.

Representative Steven Rudy (R-Paducah) argued the restrictions in the floor amendment undermined the purpose of the bill. “The floor amendment is preemptive in nature for local governments, and it prevents them from selecting the most qualified candidate,” he said. 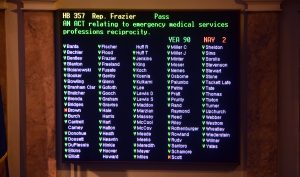